Get Fit With Bruce Willis 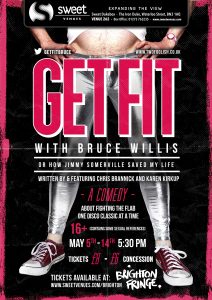 An ageing Jimmy Somerville impersonator sells his soul to the devil, in the shape of a Yorkshire granny, in return for fame, sex and money – but his wife, tired of being ignored, is finding love & lust in the arms of a hunky office junior. Desperate for success, he gives himself a week to get fit like Bruce Willis.

In the end he realises he has to stand up for himself – with the help of Jimmy Somerville and Doctor Seuss.

A comedy about disco and happiness, featuring the songs of Jimmy Somerville.

Appearing for the first time in London together are Chris Brannick, award-winning playwright – a man with both the looks and the voice of Jimmy Somerville – and Karen Kirkup who plays 5 different characters, often at the same time.

Suitable for age 16 and over with some mild sexual references and occasional mild swearing.